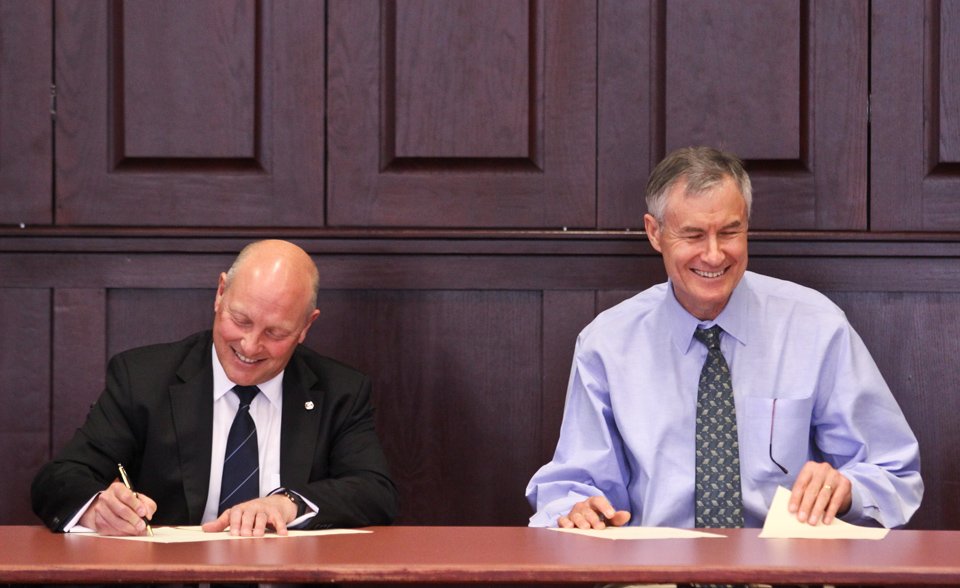 The University of Texas at Brownsville is partnering with Charles Sturt University in Australia on a cutting-edge program that no other higher education institution in the Americas is involved with.

Mark Kroll, dean of the UTB school of business, and David Widdowson, head of school for Charles Sturt University’s Centre for Customs & Excise Studies, on Sept. 5 signed a memorandum of understanding for a long-term partnership to offer a four-course, graduate-level customs and international trade certification program at UTB starting this January.

Tom Coyle, the UTB assistant professor instrumental in setting up the program here, said the plan is for this to be followed by master’s level course in Customs Management within the next 18 months and, ultimately, accreditation of the program by the World Customs Organization. The UTB (ultimately, UT-RGV) courses would be taught online and via video conferencing.

“Typically in state university bureaucracy it’s going to take 12 to 18 months to get all the paperwork signed off and done,” Coyle said. “We’re going to have to develop the faculty to do this.

“The thing about customs and compliance management is, since we’ll be the only school in the Americas (teaching it), there is not a lot of curriculum developed. There are not a lot of faculty trained to do this. This is really a brand new academic endeavour.”

Six universities in the world have customs-related programs accredited by the WCO, while Charles Sturt University is the world’s leader in the discipline. In fact, the university invented it, just over a decade ago. CCES also publishes “World Customs Journal.”

Widdowson said the primary goal of these programs is to “provide the best trading environment that we can, looking at it from both the perspective of the traders and the regulators.“

“The traders want to get their goods from point A to point B as quickly and as cheaply as possible,” he said. “The regulators want to make sure that the rules are properly complied with and there’s no security issues as well. So it’s a case of balancing that.”

The program aims to educate both sides on each other’s issues, Widdowson said.

“Producers and traders are looking for clarity and certainty,” he said. “At the same time, the regulators have to do their job.”

Widdowson said that when the program was first launched, the assumption was that it would attract mainly customs people, though half the class turned out to be from the private sector — a perfect outcome.

“We didn’t plan it that way,” he said. “We didn’t expect it. But that’s the way that it occurred. As the program evolved, now we have a very good balance of regulatory issues and commercial issues.”

Widdowson said some student projects have actually led to changes in customs policy. Such was the case in Sri Lanka, for instance, where students from customs and the private sector worked together to devise a plan for moving container cargo faster while also meeting customs requirements, he said.

“The students came up with a joint approach which was accepted and adopted by the director general of customs,” Widdowson said. “Those sorts of things are happening all the time.”

The same thing could happen here, he added. Pilot customs and trade projects in Brownsville would attract plenty of research interest and could even serve as a model for other countries, Widdowson said.

“Brownsville could well be an international trend setter in terms of new ways of doing things,” he said.

Bryce Blegan, CCES regional represent for the Americas, said customs and trade education is especially needed today, a time when pressure to expand international trade is running up against ever more daunting customs regulations.

“The regulatory environment has gotten to be much more complex,” he said. “Particularly since 9/11, the traditional customs requirements have been augmented with security-based requirements, and more recently we’ve got product safety related issues coming on top of that.

Kroll noted that Coyle “has midwifed this project from the beginning,“ and added, “Dr. Coyle is the person that did the heavy lifting on this.“

“When we first started talking about this it occurred to us pretty quickly that it couldn’t be any more relevant to our geography,“ he said. “It just struck us as almost dereliction of duty to not pursue this."

“How far it will go, we will see. Hopefully we will be offering advanced degrees in the next few years. But to not explore this possibility and address this obviously very relevant topic to our economic vitality, it would be malfeasance on my part not to do that.“